History of the National Park Service

“National parks are the best idea we ever had. Absolutely American, absolutely democratic, they reflect us at our best rather than our worst” – Wallace Stegner

With the National Park Service commemorating its centennial in August, it seemed like an excellent opportunity for us to celebrate all things “national park” for this year’s July 4th weekend festivities.

The National Park Service was established to manage an increasing number of public parkland areas, and a corresponding increase in the people wanting to visit and enjoy them. By 1916, there were already 37 of these areas, including some of the most well known of the parks, such as Yosemite, Yellowstone and Mount Rainier, run by different organizations including the US Cavalry.  The legacy of the National Park Service owed a lot to the conservationist, John Muir, who rallied like minded folk to ensure the future survival and preservation of the US’ most precious wilderness lands. He played a significant part in the establishment of the very first national parks, and Yellowstone National Park lays claim to being the first of the 59, having been established in 1872 by Ulysses S Grant.

Today, there are over 400 National Park Service run sites across 85 million acres, with 59 main large parks. The other sites include National Historic Parks and Historic Sites, National Seashores and Lakeshores, National Battlefields and Military Parks, National Recreation Areas and Parkways and National Memorials and National Monuments.

I was keen to capture the spirit of the national park estate across the different elements of the party, ranging from the décor to the food to the activities. 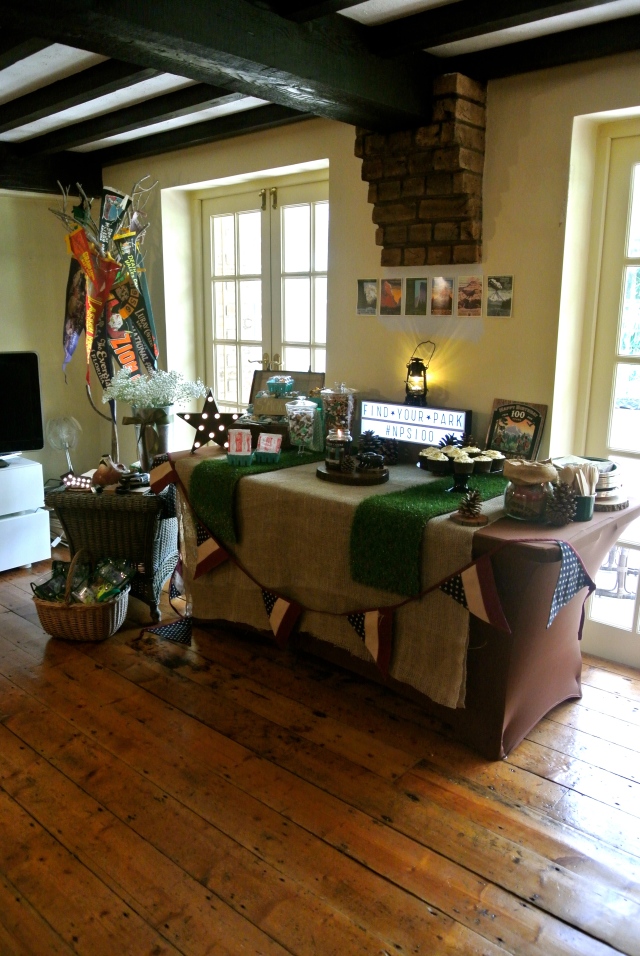 We were fortunate enough to visit Shenandoah NP about a month ago, and were able to source some key supplies during our visit as it can often be a challenge to get the necessary American products here in the UK, although it is getting better with many UK supermarkets now stocking American food and drinks (albeit often at a premium) and the increase in the efficiencies of trans-Atlantic shipping!

It started with a fabulously vintage-esq invitation created by the lovely Katie Barnes Studio on Etsy, with matching craft envelopes.

The colour scheme was inspired by the National Park Service’s arrowhead crest, which is made up of brown, orange and green. The use of logs and wood grain serve wear a tribute to the ancient forests of the National Park estate. 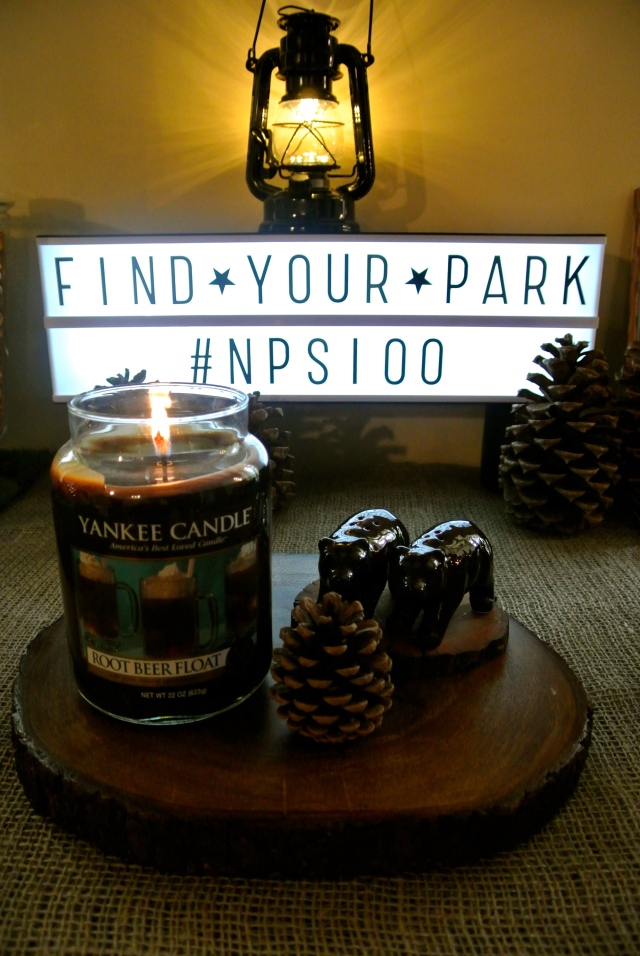 The small coasters are ancient bristlecone pine purchased from the Ahwahnee Lodge in Yosemite, and a selection of pinecones collected from our California and Washington trips (but not taken from within the national parks or national forests, of course!). The light box highlighted the centennial hashtags, #NPS100 and #FindYourPark. 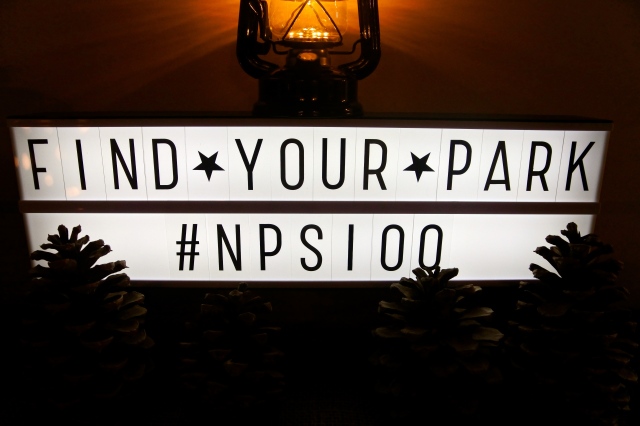 But my favorite addition to the décor was my National Park tree, made up of fabulously vivid and colourful vintage felt tourist pennants from a section of the parks and monuments we have visited over the years. (NB: If anyone sees one for Yosemite, North Cascades or Olympic, please do let me know!).

“The mountains are calling and I must go” – John Muir 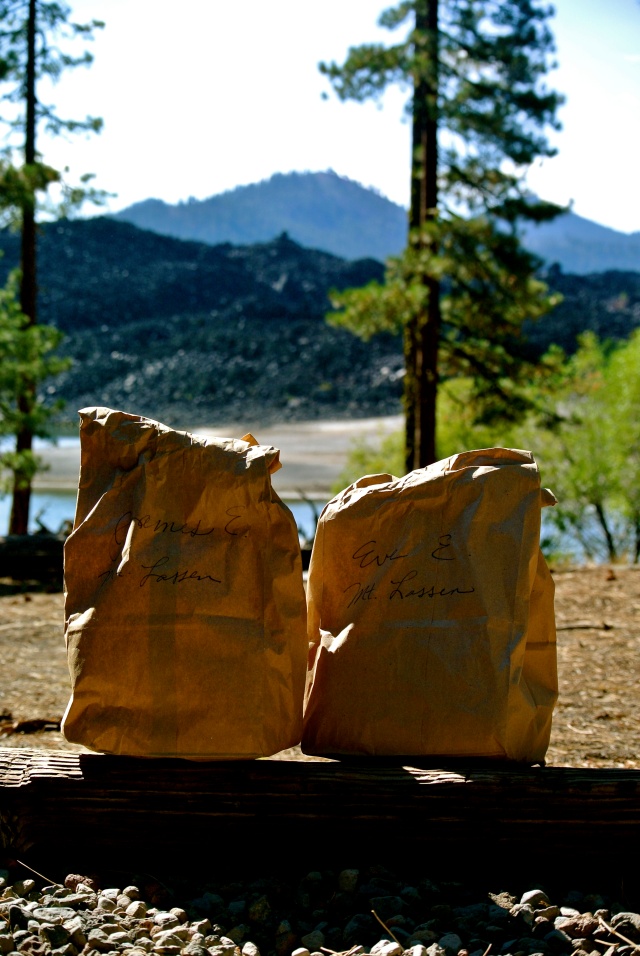 The sack lunch station was inspired by the wonderful tradition at many National Park lodges for preparing sack lunches for intrepid hikers.   The best, I think, was the one we had at Drakesbad Guest Ranch in Lassen National Park, California.  It made the trek up the Cinder Cone volcano all worth while! 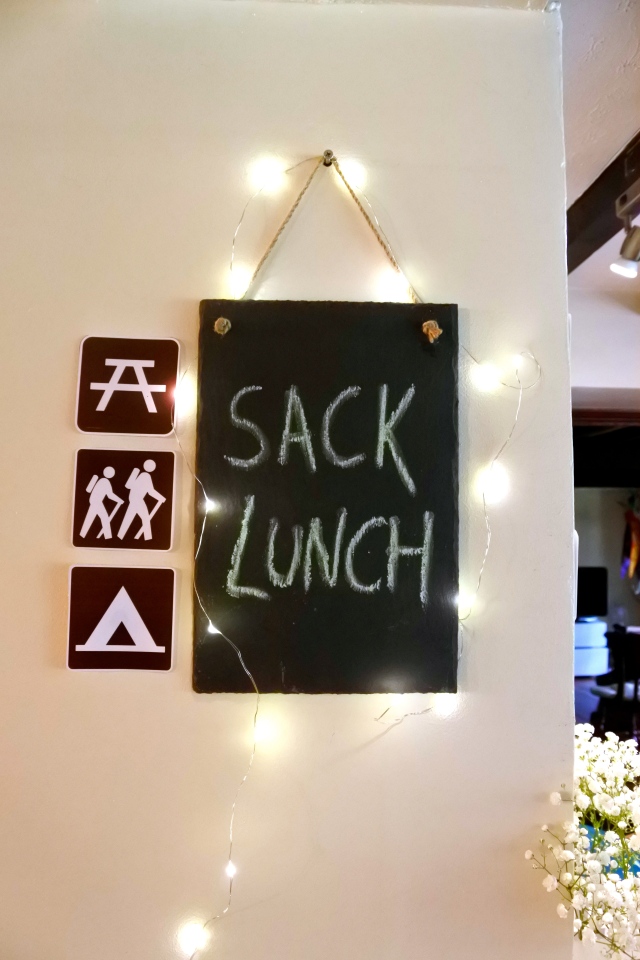 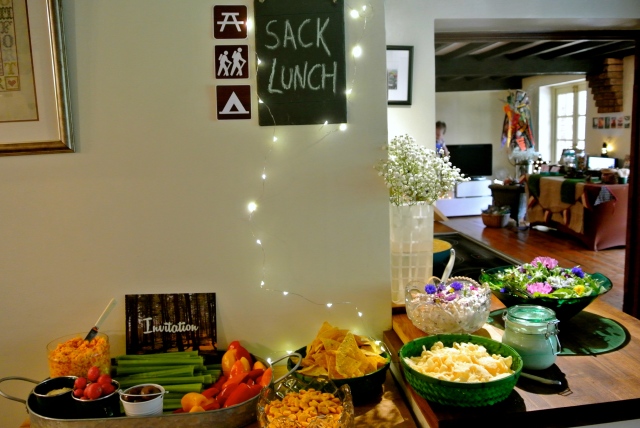 It wouldn’t be an Independence Day Party without the now legendary three cheese Mac ‘n Cheese courtesy of Martha Stewart and whatsgabbycooking.com’s pulled pork sliders. These All American classic dishes were supplemented by a Southern Pimemto cheese dip and a glorious flower salad (made with flowers from Greens of Devon) inspired by the spectacular wildflower meadows of Mount Rainier’s Paradise, Washington State.

For pudding, we had baked pistachio cheesecake and key lime pie cupcakes representing the Everglades and made with real imported key lime pie juice, no less.

Our favourite national park activity was recognised in our colour co-ordinated trail mix, which contained, peanuts, almonds, pretzels, raisins and peanut M&Ms.  The caramel and apple taffy was another timely purchase from Shenandoah NP. 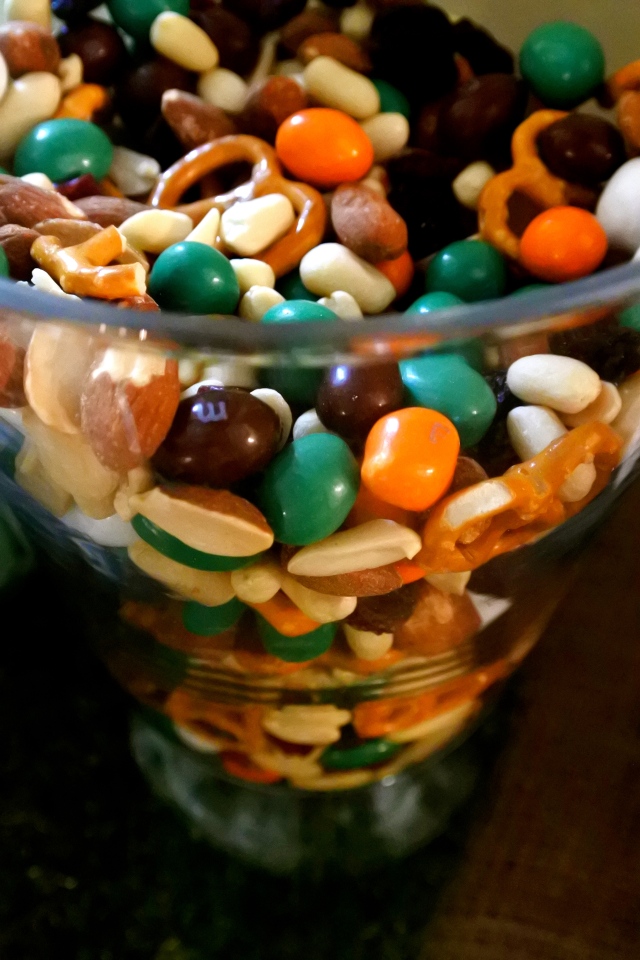 And despite the heat of the afternoon, we all enjoyed the task of perfecting our s’mores techniques over the cast iron fire bowl, with a varying degree of success across the guests. 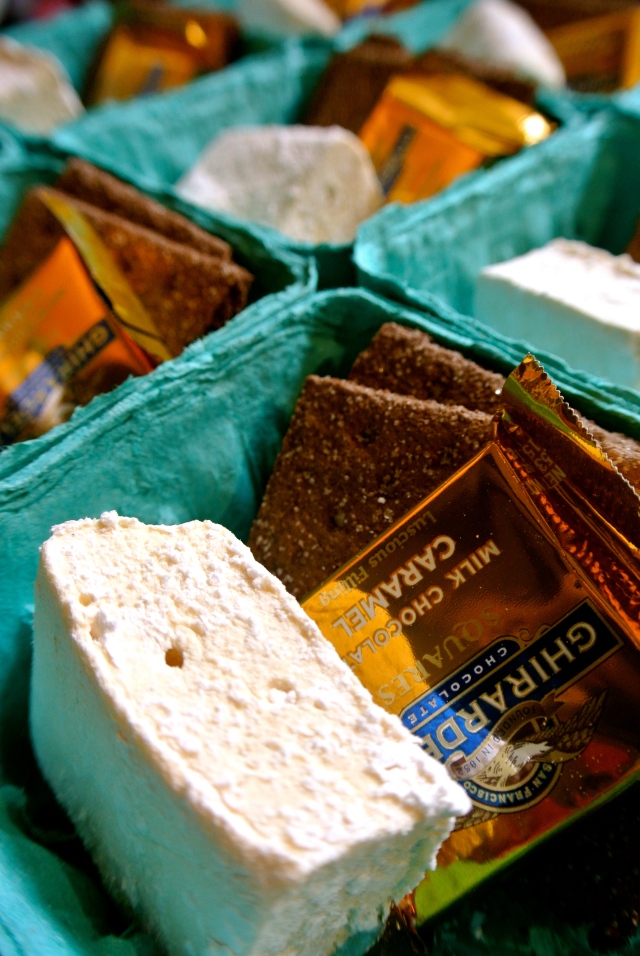 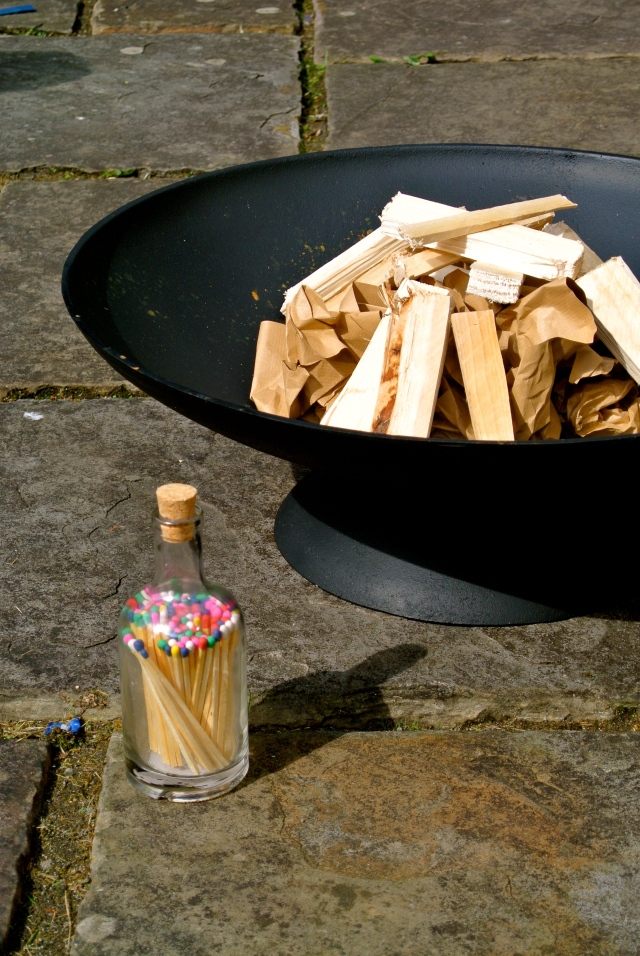 The chocolate graham crackers were bought in New York last month, along with the Ghirardelli chocolate squares, and this time introduced to home made caramel marshmallows. This activity in particular made me feel as though I was back at Quinault Lodge, where we enjoyed a few nights sat beside the lakeside bonfire.

A Swiss Miss hot chocolate was then enjoyed in a tin cup just before bedtime.

It wouldn’t have been a party, of course, without a well-stocked bar, and this time we kept up the American theme with a selection of imported beverages.

I manage to source the aptly named, Crater Lake American craft gin from the Bend Distillery in Oregon, from which we made some wonderfully refreshing Basil Greyhounds with a mix of basil leaves and grapefruit juice. Goose IPA and Brooklyn larger added to the mix, as did the Sierra Nevada Pale Ale, a tipple we first discovered during our California Road Trip back in 2014.   One of our thoughtful guests brought with them a bottle of Riesling from Walla Wall in Washington. 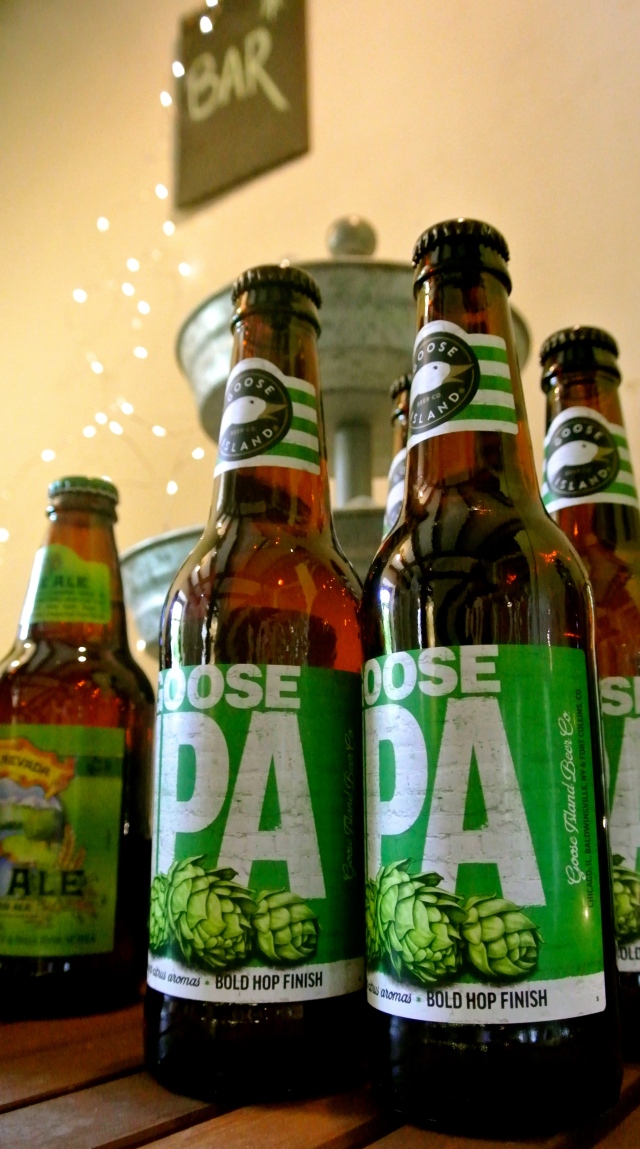 One of James’ favorite part of visiting the parks is the sheer wealth and diversity of the flora and fauna living there.  Sadly in the UK, our native species were decimated sometime in the middle ages, where ancient forests were logged to extinction, along with many of our larger mammals. Not so in the US, where it is a pleasure to behold the multiple squirrel species, chipmunks, marmots, elk and of course, the bears!

To incorporate this passion for nature, the kids were given vintage style bear masks and enjoyed running around the garden play fighting. Here is the most recent picture of our bear sightings – this fine specimen was sighted along Skyline Drive in Shenandoah, Virginia:

I also found these fantastic nature activity backpacks from the local National Trust site, and these also proved very popular with the little ‘uns. The use of a retro-inspired Fuji-Film camera and a vintage monkey bean toss game was also enjoyed by guests. 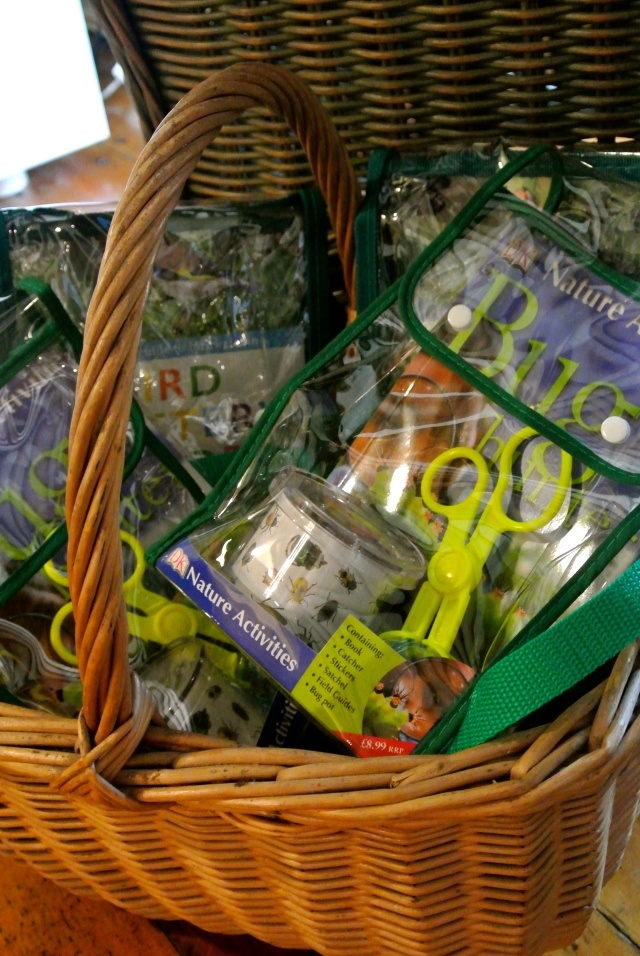 “If future generations are to remember us with gratitude rather than contempt, we must leave them something more than the miracles of technology. We must leave them a glimpse of the world as it was in the beginning, not just after we got through with it” – Lyndon B. Johnson

People always ask us why we love visiting the US so much, and our answer is always the same: Because of the National Parks. And here are just a couple of our favourites, having now visited 10 (Yosemite, Lassen, Death Valley, Mount Rainier, North Cascades, Olympic, Everglades, Grand Canyon (and got engaged here), Zion and Shenandoah). 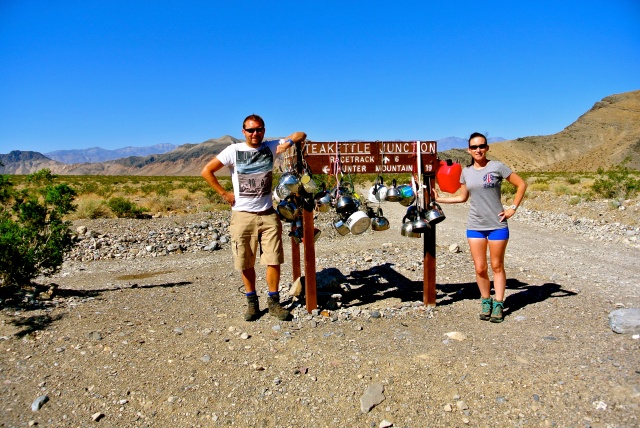 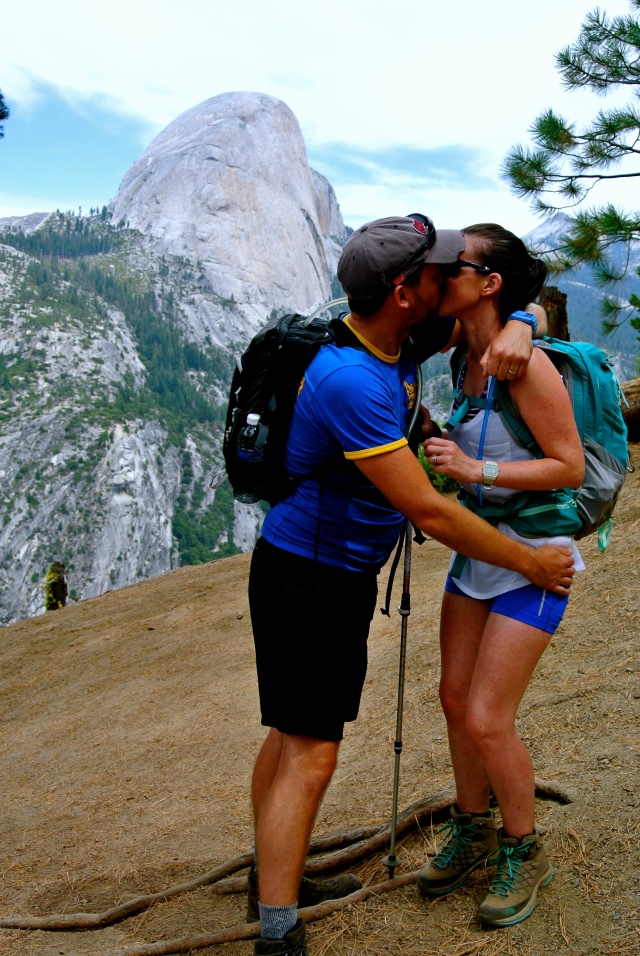 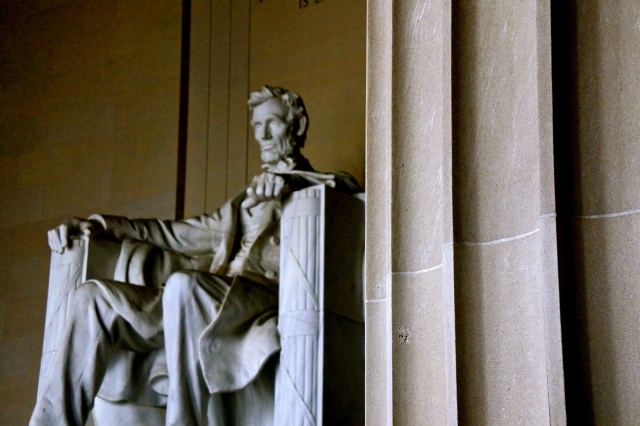 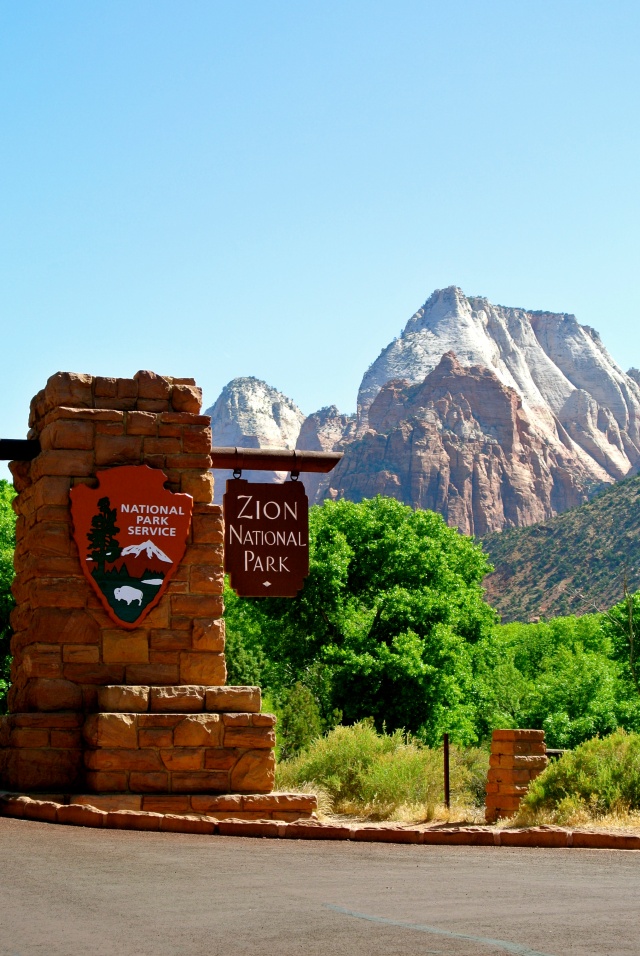 Their scenery is magnificent, often otherworldly, their vastness incomprehensible to the extreme. But above all else, they give you a feeling that can’t be experienced anywhere else, and that is a difficult feeling to describe. Whether you find yourself in the scorched desolation of the desert, or whether you wind along the wild and rugged coastland of the West coast, you find yourself at one with nature and entirely free from the stressful bussle of our modern lives if only for a moment. You find yourself lost amongst the ancient forests, amongst nature’s oldest living giants and realize how tiny and insignificant we humans really are.

It makes you realize and understand above all else, that we have a duty to preserve our planets most beautiful and awe-inspiring landscapes. And it is at times like this that you truly appreciate the service that the Park Rangers and advocates of the National Park Service have given, not only for the United States, but in acting as the standard for the rest of the world.