It’s been 26 years since we were all first introduced to the bright and wonderful future of 2015. In Back to the Future’s second instalment, Marty and Doc jettison off in a flying DeLorean from the year 1985 to deal with a crisis involving Marty and Jennifer’s problem child 30 years in the future.  And the day they choose to return to just happens to be October 21st 2015 (i.e. TODAY!), a day many of us have been anticipating since the movie was released way back in 1989.

There have been many articles this week about the predictions made in BTTF2 about modern day 2015, and so I am not going to repeat what has already so eloquently been comment on by others. Instead, here are 8.8 ways you can mark this audacious historic occasion (ironically, my iPhoto is playing up, and so I have provisionally uploaded some instagram pictures – better quality pics to follow later today!):

Rehydrate a pizza for tea 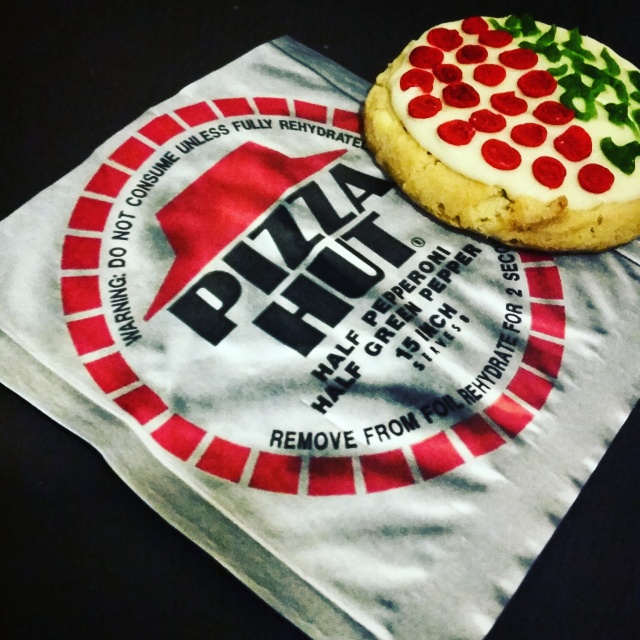 Unless you’re an astronaut, you won’t be familiar with the need to rehydrate your food, but here is how you can turn a teeny tiny Pizza Hut morsel (actually a cookie decorated with white chocolate and icing pens) into a fully fledged full sized snack (a real pizza!).

WARNING: Do not consume unless fully rehydrated.

Many theatres are showing special screenings of the movies, but you can also enjoy high definition BluRay versions at home! 2015 also happens to be the thirtieth anniversary of the original instalment’s release, another significant cult classic milestone.

Support the Chicago Cubs in their attempt to win the World Series.

The Cubs will face the Mets at Wrigley Field this evening, and this could be the year where the Cubs end their 100-year title drought. There is now even a Miami team, the Marlins, which did not exist in 1989. A win for the Cubs would certainly be a huge tick for the long list of BTTF futurology predictions!

Wear a life preserve or wear your pockets inside out

Life preserves are certainly an accessory we all wear today, but Marty’s son preferred the inside-out pocket look. We are still waiting for Nike to release their self tying laces, even though the company has already patented the design!

The Pepsi Free of the 80’s has become Pepsi Perfect by 2015, and the drinks giant has created a limited edition for BTTF Day if you can get your hands on one.  A lesser alternative would be the futuristic looking TAB clear, available in many American food stores here in the UK.  The Future is Now!

Thank goodness we do not have to endure the prospect of the Holomax Jaws19 rendition!

At the time, the Jaws franchise was taking the world by storm, and the nod to Max Speilberg was a humorous touch.  A parody has been created, however, if you are sad that Jaws 19 has been shunned into the realm of science fiction.   A reference to the continuing Star Wars saga would have been more appropriate:)

Attend a rhythmic ceremonial ritual at your local nightclub whilst trying to avoid bumping into your future self.

This is a tricky one, but I am sure there will be plenty of BTTF events taking place nationwide.

If you can find one…

Just take a moment and be thankful that you don’t have a fax machine in every room of your house, although this doesn’t quite make up for the fact that we aren’t all whizzing around on Hoverboards:(

BACK TO THE FUTURE DAY