The coastal region of the Pacific Northwest’s Olympic National Park is known for its rich marine mammal population, with Orca’s, harbor porpoises and migrating grey whales commonly sighted at different times during the year. Its rugged and wild coastline provides a uniquely rich habitat for other species of marine life too, including the spectacular star fish and the gorgeous sea otter.

Our short trip to the rustic Kalaloch Lodge (located within the National park Boundary) in July lived up to our expectations, by providing us with an unexpected front row view of one of the world’s largest and most loved mammals, the Humpback Whale (Megaptera novaeangliae).  The Humpback can grow to 50 feet, and has an unusual melodic song and playful character, making it one of the most endearing of the baleen family.

Whilst we have subsequently learned that this summer has seen an unprecedented number of Humpback sightings along the Washington coast, we originally mis-identified these gentle giants as grey whales, due in part to the lack of any mention of humbacks in the “whale trail” information boards posted along Kalaloch Beach.

We were pleased to learn, however, from the good fellows at the Marine Mammal Institute at Oregon State University, who identified the sightings from our photographs.  We were entertained for hours by the graceful spy-hopping and feeding of the Humpback off the coast, and we didn’t even have to leave the comfort of our bluff cabin porch.  It was a magical evening. 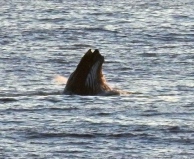 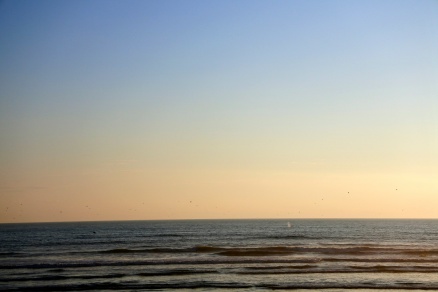 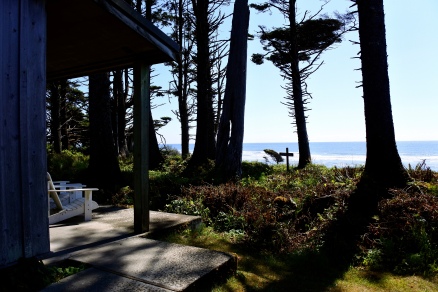 Humpback Whales have always been one of my favourite marine mammals, and this is largely due to the featuring of these whales in my then favorite Star Trek movie, the franchise’s fourth installment, The Voyage Home. The movie is the only movie where there is no traditional villain, and instead, humanity turns our to be the bad guy.  Our past whaling exploits are unveiled to have put the future of the human race in jeopardy, as an alien probe returns to the twenty second century to communicate with the then extinct Humpback whale.  The probe, clearly, isn’t happy that he is unable to sing with the whales after having travelled so far, and it is left to Kirk and his trusted crew (this time onboard a Klingon bird of prey) to return to a 1980s San Francisco to locate and retrieve a specimen of the species back to the future to save the planet from the probe and imminent destruction.

If you ignore the ultimate paradox of the movie (i.e. that in removing one of the planet’s only breeding pairs together with one of their most passionate biologists, the crew’s actions make the whale’s extinction inevitable), the movie choice of subject matter embodies the public’s engagement with Greenpeace’s “Save the Whale” campaign in the late twentieth century.

Whilst some look to argue that the movie proved to be a catalyst in the campaign, at the time of the movie’s release in 1986, the fate of the Humpbacks was already improving, following urgent conservation action being taken in previous decades culminating in a total ban in the mid 60s, and designation of the whales as endangered in 1970.  The world, for the first time, came together in an attempt to repopulate the species after industrial whaling had decimated over 90% of the planet’s population of Humpbacks in less than a century.

Our surprise encounter with the Humpback is living proof that the conservation efforts of the last thirty years have made a difference to the future prosperity of this fantastic species, and numbers in the Pacific Northwest region are thriving, with numbers believed to over 20,000.  So much so that there are even petitions to look to remove the species from the endangered list, although the ongoing plight of other segments of the species (for example there are as few as 100 whales in some southern areas) means that the population as a whole remains at threat, reminding us that there is still some way to go to repopulate the oceans with numbers reflecting those before commercial whaling became prevalent.

As Mr Spock observes in the movie: “To hunt a species to extinction is not logical”.  Dr Gillian Taylor responds fittingly: “Whoever said the human race was logical?”.  Whilst this retort may have been an accurate assessment of past generations, a growing acknowledgement of the importance of a harmonious relationship with the natural world around us looks to offer greater optimism for the survival of our planet’s most wonderful and largest living things.