Super Bowl 49 marked the end of a decade-long Championship drought for the New England Patriots, as the Seattle Seahawks squandered their chance to clinch a second successive Super Bowl title.

The post-season showdown in Arizona proved to be an all-round explosive extravaganza, as spectators witnessed the score-line see-saw between the East and West coast contenders.  The battle raged on until the bitter end, and the final minutes of the game certainly did not disappoint.

A spot of juggling by Jermaine Kearse miraculously transformed a would-be fumble into a 33-yard gain for the Seahawks, and the Brady-Belichick partnership was all but ready to head home empty handed.  But an ill-judged, and ill-fated play-call by Carroll saw a one-yard, and two-timeout advantage for the raptors, surrendered, as Rookie, Malcolm Butler, stole the ball and the glory, leaving the World Champions incredulous, and four points shy of the title.

It took a while to take in what had just happened.  No one could believe it.  The distraught faces staring out from the Seahawks’ sideline, however, said it all.  There could be no denying that Seattle’s Skittle-junkie, Marshawn Lynch, was the obvious choice to lead the Legion of Boom’s final charge into the end zone, but it was the Patriots who were left counting their luck stars and stripes that the Beast Mode had been overlooked for the game’s most decisive set-piece.  This change in game plan can only be described as a classic case of Left Shark vs Right Shark syndrome.   I will explain…

As those of you who watched the splendor that was the Pepsi Half Time Show will know, Left Shark, was (arguably) the better half of a Shark duo supporting Katy Perry’s dazzling 12-minute performance.  The unintended star didn’t care that he was out of sync against his impeccably co-ordinated right-hand counterpart (a.k.a. Right Shark (of course!)), and instead embraced his shortcomings by continuing to revel in his imperfect and endearing dance routine for the duration.  He knew he would never be a Right Shark, but continued with high spirits, nevertheless.

Unlike the Patriots, the Seahawks were never going to win the Lombardi Trophy on precision play, and their Super Bowl dreams were dashed the moment they dismissed their tried and tested physicality in favour of an uncharacteristically “Right Shark” game plan.  And so, if you take only one thing away from this blog today, let it be this:  We can’t all be a Right Shark.  Embrace your inner #LeftShark.

Whereas the game itself was full of fights, flukes and fireworks, our 2015 Super Bowl party was a more understated and elegant affair.  A gorgeous bouquet of vintage poppies, punctuated with tiny patriotic flags represented the New England contingent, with the lime and navy of the Seahawks represented in candle format.  The token green Skittles a nod to Seattle’s heavyweight, Lynch, and his perchance for the magical “go-faster” pellets of his youth. 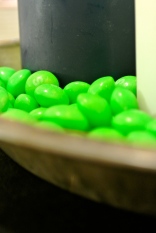 I can’t believe the season has already reached its conclusion – it seems like only yesterday we were enjoying the sunshine at the inaugural pre-season game at the Levi Stadium in Santa Clara in August for the clash between the 49ers and last year’s runners up, the Denver Broncos.  The Levi Stadium will have the honour of hosting Super Bowl 50, and Super Bowl 49 has certainly set the bar high for next year’s contest!