Cardiff now has its very own liquid nitrogen ice-cream parlour!

Using liquid nitrogen to make ice-cream results in a unique creamy texture, as the sheer speed within which the ice-cream mixture freezes means ice crystals do not have the chance to form.  Even with the best ice-cream churner, you will not succeed in achieving this awesome consistency without it.

The lab geeks at Science Cream (great name!!) have a stylish boutique store in one of Cardiff’s wonderful Victorian Arcades (Castle Arcade), with a streamlined parade of KitchenAids ready to mix-up your order right in front of your very eyes!  It really is incredible stuff. 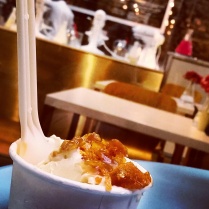 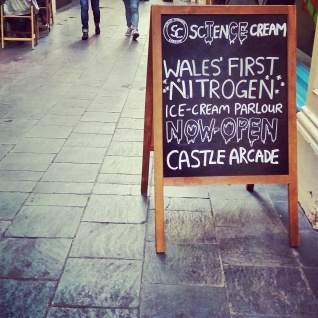 The flavours are also fabulous, and the guys at Science Cream are promising to change their menu regularly, with amazing home-made toppings and sauces to add a further level of texture.  And the science does not stop there, you can also enjoy a cup of bubble tea here!! The use of cryogenics in ice-cream is not, however, a 21st century thing: the concept of using liquid nitrogen as a freezing agent for making ice cream is an old one, and companies such as Dippin’ Dots in the US have been selling this culinary delight since the 1990’s.  I have been a fan of these granular delights since having my first pot at NASA’s Kennedy Space Centre, Florida.  They are FANTASTIC! 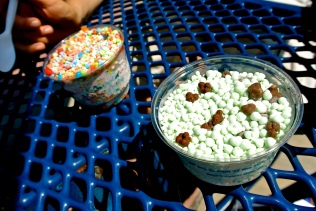 But for those of you who are thinking you may like to “try this at home”, be warned, liquid nitrogen is incredibly dangerous (it has a staggering boiling-point of -196 degrees celsius!) and is not readily available to the public. And this is the reason why:

However, as an alternative, you can also achieve a similar result using the less aggressive, “dry ice” (frozen CO2).

And so, get yourselves on over to Science Cream and see how much fun (and delicious) science can be!