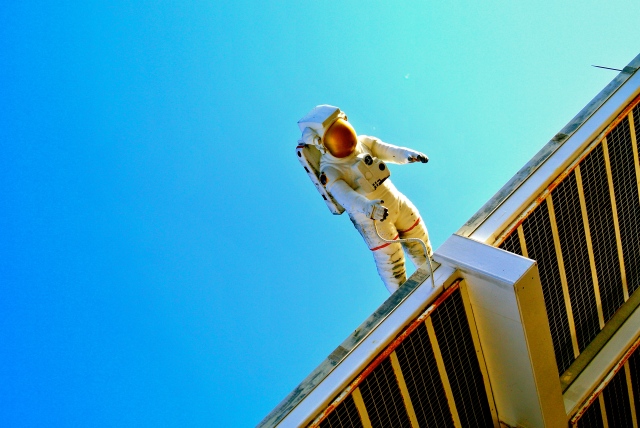 Last weekend, we met three space legends: three individuals who have each made their own incredible contributions to humanity’s exploration endeavours.

Having started his NASA career on the Gemini Project, Aldrin was selected to fly along with Armstrong and Mike Collins on Apollo 11. The landing of the Eagle realised Kennedy’s “we shall go to the moon” proclamation months before the end of the decade, and crucially before the USSR managed to so. Despite Russia’s early success (with the launch of Sputnik and Uri Gargarin into orbit causing significant panic in the West), the Space Race was won in the end, by the Stars and Stripes of the USA.

Despite having retired from NASA in 1972, Buzz continue to support his nation’s interstellar exploits, and is now a key advocate of Obama’s ambitions to launch manned missions to Mars by the 2030s.

This has been far more than three men on a mission to the Moon; more still than the efforts of a government and industry team; more, even, than the efforts of one nation. We feel this stands as a symbol of the insatiable curiosity of all mankind to explore the unknown.
– Edwin “Buzz” Aldrin Jr

Alan Bean travelled to the moon on Apollo 12, and became the fourth person to walk on the moon. Alan is also hailed as the only artist to have visited the moon, and Alan uses moon dust to recreate beautiful images of our closest extra-terrestrial neighbour.

Bean continued to work for NASA after the end of the Apollo programme, and spent time on America’s first space station, Skylab, where NASA conducted tests to see whether humans could live and work for extended periods, with sights very much on future Mars colonies.

The third person we met last week was NASA veteran, Bruce McCandless, who was a commander on NASA’s first aerospace vehicle, the iconic Space Shuttle, and is famous for undertaking the first untethered EVA (Extra Vehicular Activity) in 1984 using the Manned Manoeuvring Unit he helped develop. During this EVA, on mission STS-41-B, McCandless drifted more than 300 meters away from the safety of the Shuttle, allowing fellow astronaut, Hoot Gibson to take this mind-blowing image.

Interestingly, Bruce was also part of the CAPCOM team for Apollo 11, and he was also part of the mission that deployed the Hubble Telescope using Space Shuttle Discovery in 1990, allowing us to see further and deeper into the universe. The telescope was, famously, repaired by another team of astronauts in 1993, arguably saving NASA from certain disbanding.

It always surprises, and saddens me, that few people seem genuinely interested in our exploits in space. This disinterest on the part of the public is not, however, a new phenomenon. Indeed, even after the historic steps taken by Armstrong in 1969, the public’s support had waned by the time Apollo 13 launched in 1970. It took disaster and peril to reignite the public’s interest in the space programme. The same story during emerged during the Shuttle programme, where the frequency of the shuttle launches saw them bring tsing for granted and man’s first reusable space ship was viewed as something far from extraordinary.  Even NASA’s selection of a teacher to go into space could not enthuse the nation. The fatal Challenger disaster, again, sadly proved that public’s fickle interest in the space programme.

There is no question that since the early 2000s, NASA, and other space agencies across the globe, have done amazing things, and the challenge of keeping the world abreast of these achievements continues. But Chris Hadfield and others are trying to change this. Hadfield is arguably one of the most well known astronauts of our time, with his space tweets and his own rendition of David Bowie’s Space Oddity from the International Space Station brought space to the masses via the social media capability that was certainly facilitated by Hadfield’s twentieth century predecessors. I met Chris at a book signing in Waterstones before Christmas, and he is clearly on a mission to inspire a new generation to aspire to contribute to mans next steps towards the stars.

NASA’s Administrator, Charles Bolden, made his House testimony yesterday seeking a higher budget to allow NASA to continue its scientific endeavours more independently of Russia as America awaits its commercial partners to ready themselves for the job of becoming NASA’s next gen. space taxis.  Since the decommissioning of the shuttle fleet in 2011, NASA has relied on the Soviet Soyuz spacecraft to get its astronauts to the laboratories aboard the ISS. With increasing tensions between Russia and the West, it will be interesting to see whether fears about the weaponisation of space will result in NASA taking back a more pivotal place in the US’ defensive contingency.  You can read Bolden’s address here: