What a weekend for lovers of sporting spectacles it has been!

Not only have we just spent a significant proportion of the weekend glued to our tellies watching six European teams battle it out for a round one advantage in this year’s RBS Six Nations tournament, but we are now left counting down the hours to rugby’s North American cousin’s epic showdown between the Bronco’s and the Seahawks at the MetLife Stadium, New Jersey, later this evening.

To mark the end of one great sporting season, and the start of another, James decided to paint a selection of the figures from his recently discovered vintage Blood Bowl game in the style of the six nations’ team kits, representing: England, France, Ireland, Scotland, Wales and Italy. 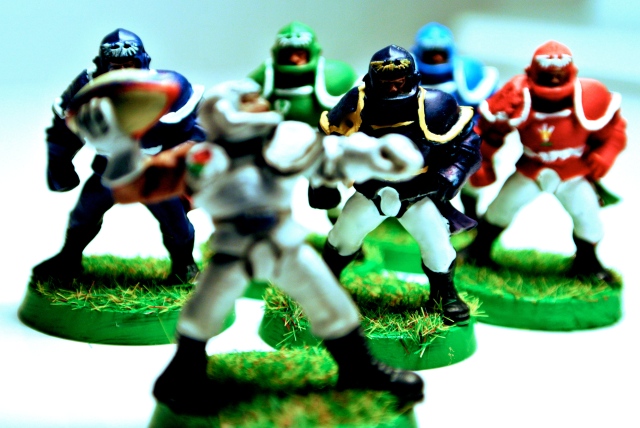 For those of you who have never heard of the game, BloodBowl is a board game where two teams from different races of the Warhammer fantasy world engage in a brutal and devious melee that parodies a hybrid of rugby and NFL game play.

In Europe, after week one, and three close games, Ireland sits in the top spot, but the title is anyone’s for the taking.  Tune back in at the end of March for a round-up of the tournament’s legendary Super Saturday…

Meanwhile across the pond, we eagerly await the result of the 2014 Super Bowl…New post to follow next week!!