INDEPENDENCE DAY,  the most important of all US public holidays, has not been the same since 1975.   The terror invoked by the iconic “DER DUM” of John Williams’ award winning score, has changed our relationship with the sea forever.

Jaws’ absence from the movie makes it all the more powerful, the suggestion of his presence fuelling a relentless sense of anticipation and dread as the scenes progress.  The severed limbs, screaming, and the gushing of blood into the water all add to the frenzy brewing in the viewer’s imagination, but it is not until around the ninetieth minute mark that the Great White monster graces us with an appearance.  However, Jaws may never have been the success it eventually was, had it not been for the catastrophic failures suffered by “Bruce”, the mechanical shark created as the starring role of the movie.  Endless issues with the machine meant that Spielberg made the decision that would lead to him being ordained as the father of the summer blockbuster, by returning to the editing suite to change the focus of the picture from an all-out monster movie, to the menacing thriller we are all now familiar with.

The release of Jaws proved to be a watershed moment for cinema on yet another front, as its production team pioneered a new business model involving the simultaneous release of the movie at hundreds of theatres across the country, thus maximising audience figures.  Almost overnight, this distribution model, along with a new trend for aggressive merchandising and marketing, became the norm, and commanded rocket profits (or epic flops) at the box office.  Without Jaws we would never have grown up with Han, Indiana, Sloth or Marty, and life just wouldn’t have been the same.

And so, in tribute of cinema’s first summer blockbuster, Jaws became the inspiration for this year’s independence day celebrations.

I was fortunate enough to discover a wonderful seller on Etsy, “HelloMySweet”, from whom I ordered a set of Jaws-themed printables, and these fantastic prints brought the whole theme together wonderfully: 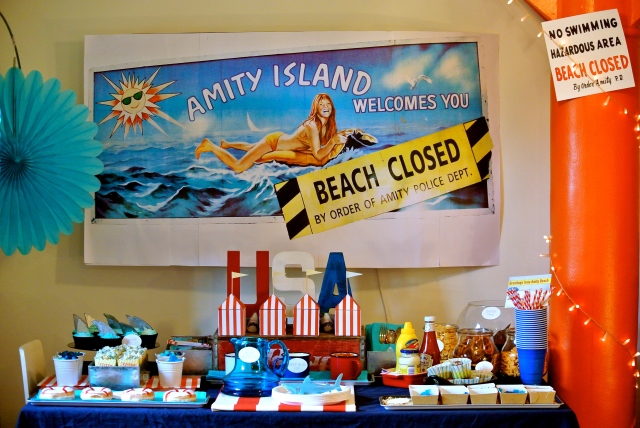 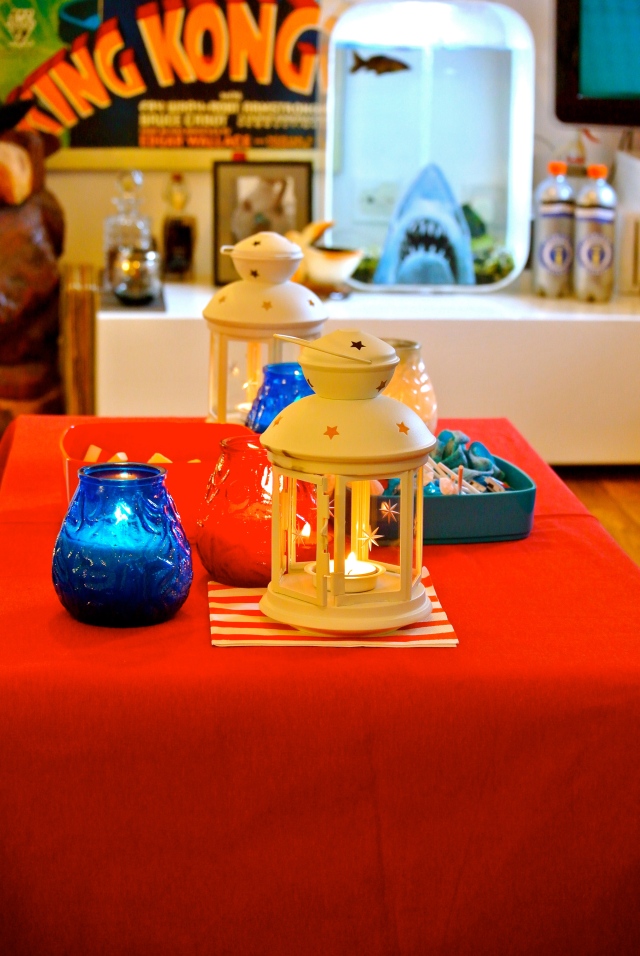 The red, white and blue was accented with splashes of yellow, and the nautical theme continued with the addition of the cherry and red Amity Beach huts (again, courtesy of HelloMySweet).

Our fish tank was made up to replicate the famous Jaws lobby poster, our little Black Fish bobbing perilously close to the fearsome beast… 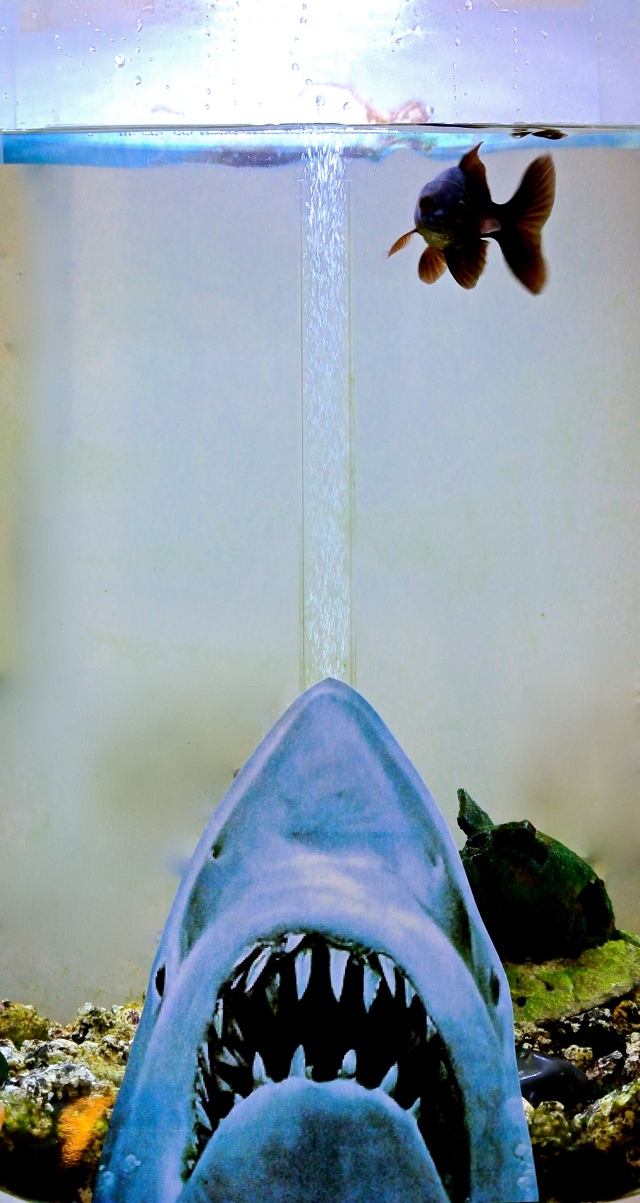 …whilst the original printable poster was lovingly defaced in recognition of the creativity of Amity’s unruly youth.

Realising early on that some of the party had not, in fact, EVER seen Jaws (Yes, you did read that correctly!!), I quickly procured our copy to educate these deprived individuals.  This was necessitated partly by the fact that I had prepared a Jaws Quiz especially for the occasion…

However, this “education” was somewhat delayed by the majority vote to watch British (Scottish) national treasure, Andy Murray, snatching a place in the Semi-finals of Wimbledon from the jaws (sorry, that was Mrs Keates’ suggestion!) of rival Verdasco.   Murray, for those of you who did not have access to a telly over the weekend or who were otherwise indisposed, made British tennis history on Sunday by becoming the first British man to win Wimbledon since Fred Perry way back in 1936.  Great stuff, Andy! 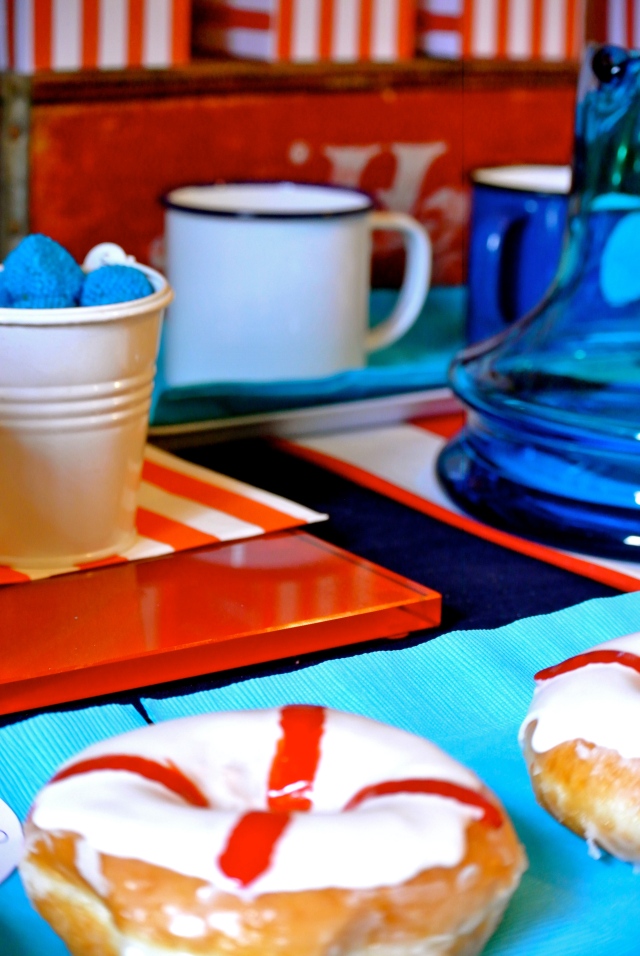 Blue food was the flavour of the day, although it was not possible to extend this theme to the “Brody Burger” station, without making the food inedible! However, blue, and nautical themed, desserts were easier to prepare, my favourite being the wonderful homemade bubblegum ice-cream and mochi which sat comfortably on the sea of blue jelly.

It was certainly no boy scout picnic, that’s for sure! Thanks to everyone for coming! 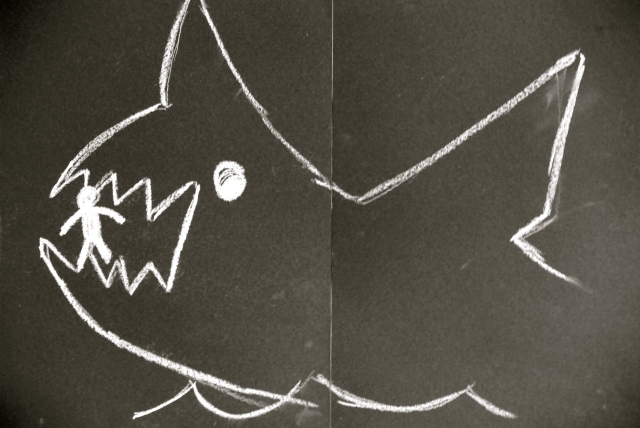