Today is the 50th anniversary of the first ever Moon landing.   Last weekend, we celebrated this epic achievement at our annual Summer party.

But before we look back at the festivities, here is a short history of the missions’ genesis and its legacy…

We choose to go to the Moon

In 1962, President J. F. Kennedy gave NASA the mission to land men on the Moon and return them safely to Earth by the end of the decade.  The Americans were in the middle of a “Cold War” with the Soviet Union, and the pressure was on after the Russians launched Sputnik, the first satellite into orbit in 1957, and in 1961, launched Yuri Gagarin into space.

Kennedy’s Moon-shot challenge elevated the stakes of the Space Race, and the two countries were propelled forwards to become the first to reach the Moon.

We have a lift off!

The Eagle has landed

On July 20th, Neil Armstrong became the first human to set foot on another world, making history as his “one small step” off the lunar module represented a “giant leap for mankind”.  Buzz Aldrin joined him shortly afterwards, and the two of them collected Moon rock samples and carried out a number of scientific experiments.  After just a few hours on the Moon’s surface, Neil & Buzz returned to the Moon’s orbit to rendezvous with Mike Collins, who had stayed behind in the Command Module, Columbia.  The crew finally splashed down in the Pacific Ocean 3 days later, becoming global celebrities after approximately 650 million people globally tuned in to watch their epic achievement.

Whilst the astronauts themselves got all of the glory, the Moon landing would not have been possible without the support and hard work of over 400,000 other men and women who worked tirelessly to fulfil Kennedy’s ambitious goal.  These people included: NASA employees, scientists, engineers and software programmers, with some notable contributors including:

The end of the Space Race

Only 5 more crewed missions went to the Moon after Apollo 11, and the last man to leave the Moon was Gene Cernan, in 1972 (Apollo 17).

Even though we haven’t been back to the Moon since then, we have continued to explore our Solar System and beyond, including:

The legacy of Apollo

The legacy of the Moon landing continues to influence politics, science and pop culture to this day.  The Moon landing had arguably the most influence on the environmental movement and in the advancement of technology.

The pictures of the Earth taken by Apollo 8 (“Earthrise”) & Apollo 17 (“Blue Marble”) highlighted the Earth’s fragility and true uniqueness, and it was said that “on the way to the Moon, we discovered the Earth”.

The Apollo programme made micro-electronics more affordable, and led to the development of the pocket calculator and the smart devices we all use today.  Rich business-men have been inspired to create their own space companies, including:

Back to the Moon

NASA recently announced that it will be sending crewed flights to the Moon by 2024 and they will build a space station that will be the gateway for future missions to Mars. The new lunar programme is called, Artemis, the Greek God and Apollo’s sister.   I can’t even start to express how excited I am to be able to follow this next step in humanity’s space adventures.

As we celebrated the 45th anniversary of the Moon Landing, we had plenty to get our party started for the big five-oh this Summer, and had a blast with family and friends.  Here’s a brief “how-to”:

Our invitations were designed by Ollie and Lulu from Etsy, and we found some vintage US postage stamp for the envelopes.

Re-creating the Summer of ‘69

Reflecting the patriotism and national interests synonymous with the Space Race was an easy task, and involved adding plenty of the Star Spangled Banners around the house and garden. 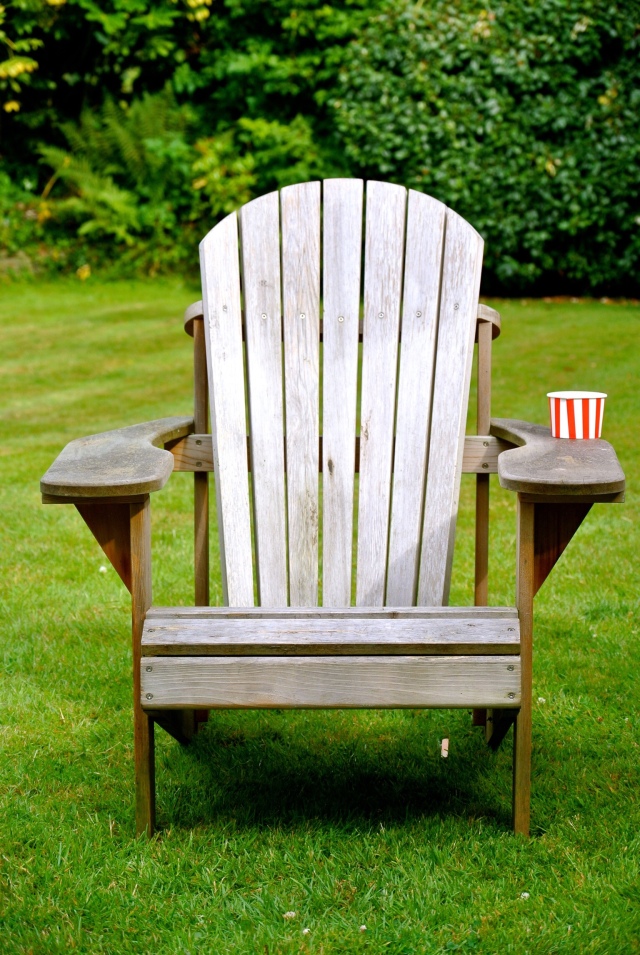 We covered our dining room with a foil backdrop, representing the innovative new foils developed by NASA to withstand the extremes of space. Finally, it wouldn’t be an Apollo party without a life-size cut-out of the legend, Buzz Aldrin, and so we set one of these up next to the buffet table.

We also set up our 1969 Dansette Prince with some original Moon Landing vinyl and a Pana-Vue Automatic kitted out with an Apollo 11 commemorative slide deck to add some authenticity to the room. Thanks to Clare for the awesome blue orchids that looks fab in our MGM cocktail glasses and Diesel astronaut vase:)

We pulled together a Spotify “Apollo 11 50th Party” soundtrack mix, comprising of a selection of the songs actually played by the Apollo 11 crew on their 8 day mission to the Moon and a mixed genre of “moon-themed” tunes thrown in for good measure. 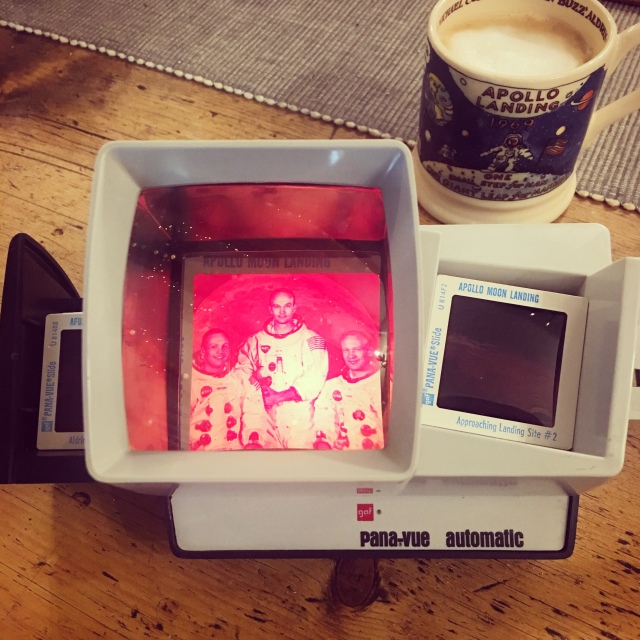 We served traditional American fare, including hot dogs, mac & cheese and pulled pork, and served pineapple and cheese sticks Sputnik style.  One of our friends was celebrating a birthday, and so we created a moon cake especially for the occasion.  For desert, we re-created the planting of the flag scene using Lego spacemen and edible Rice Krispie moon-rocks and served retro Tunnock teacakes and Milky Ways. As we were blessed with an unusually sunny day, we also offered classic Zoom lollies to our guests. 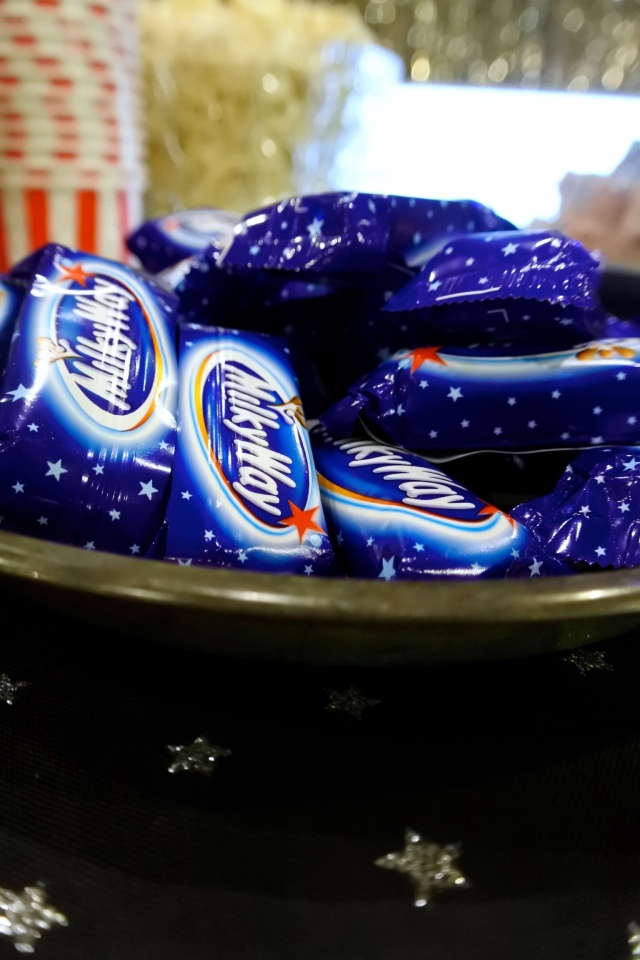 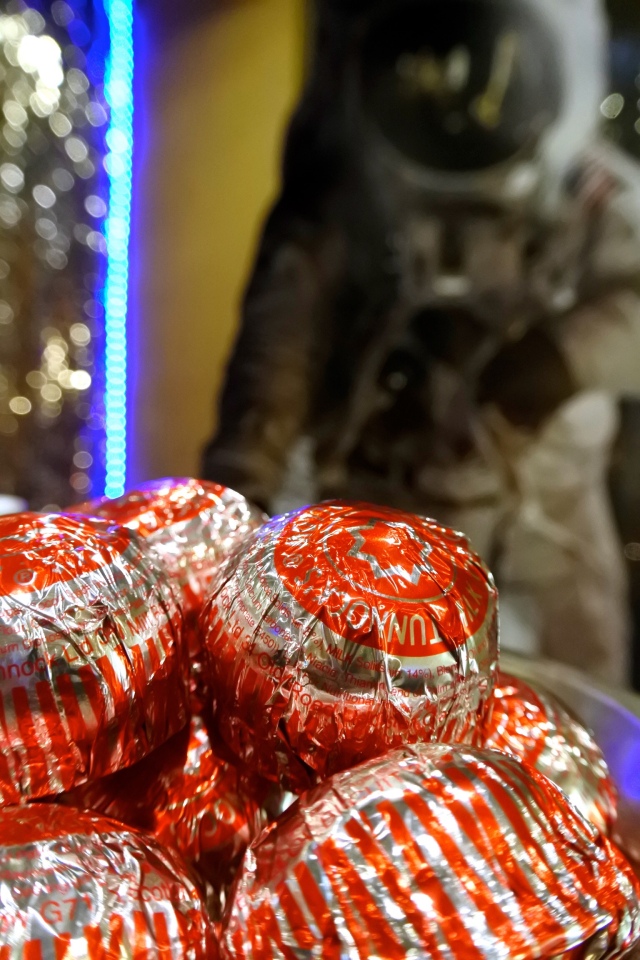 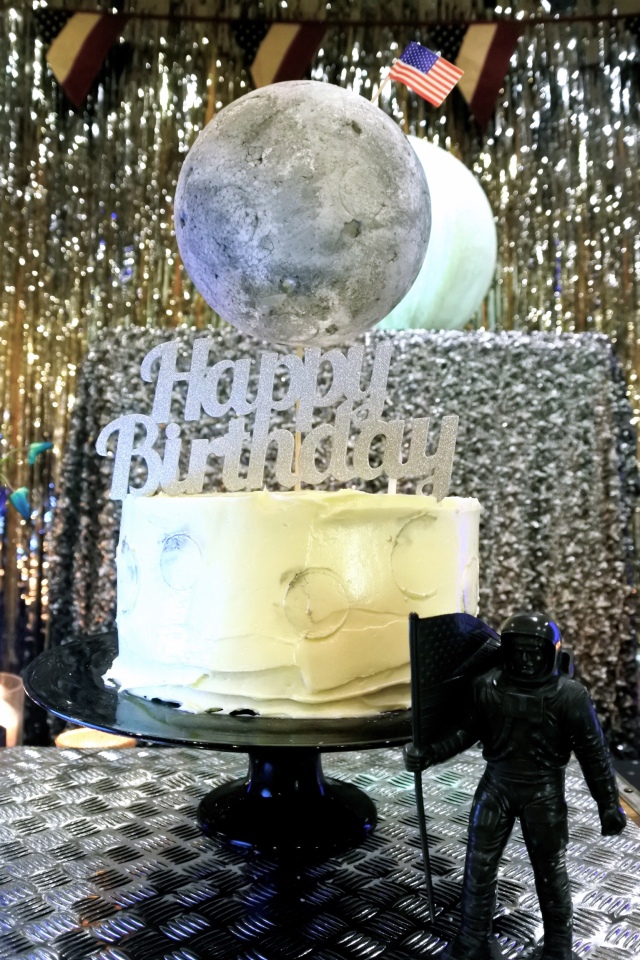 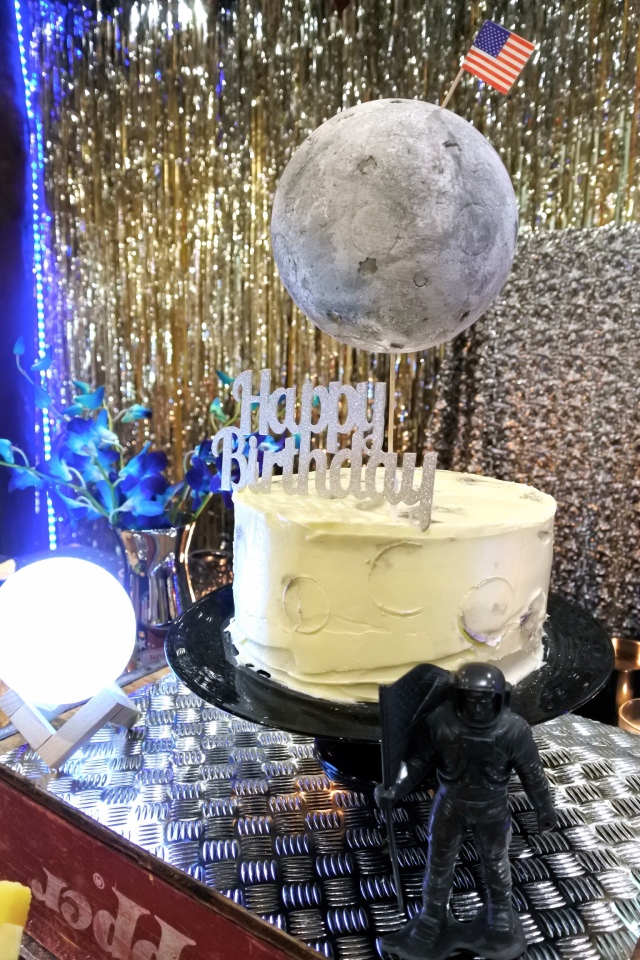 As those of you who have read my blog before will know, a party is not a party unless it involves a box of dry-ice (available from ChilliStick).  We set up a well-stocked and spaced themed “hydration station”, featuring Moon Shot gin (where its botanicals have actually travelled into space), Aviation Gin, Special Edition Kronenbourg 1664 and a selection of space worthy wines. 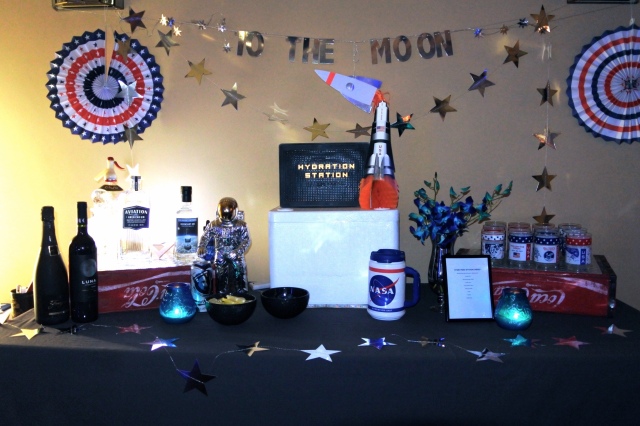 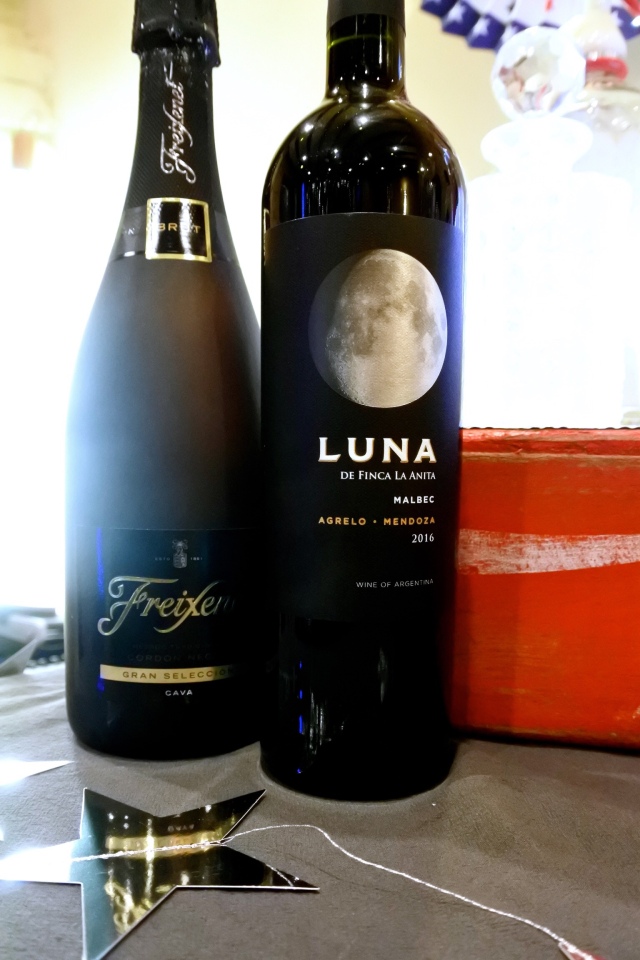 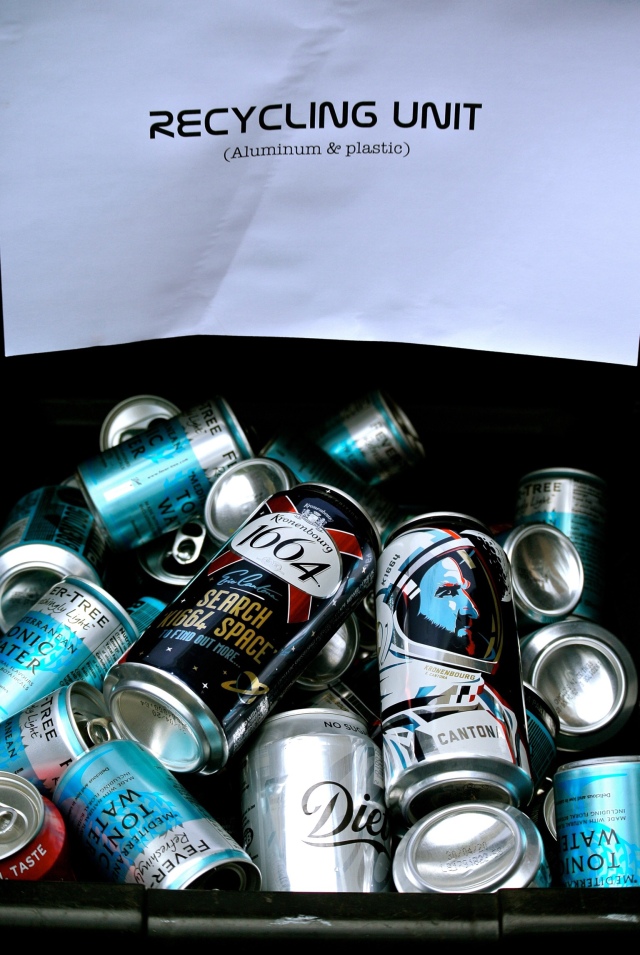 It was a pleasure to have another reason to use our amazing Libbey Apollo glasses which document the missions of Apollo 11, 12, 13 & 14. 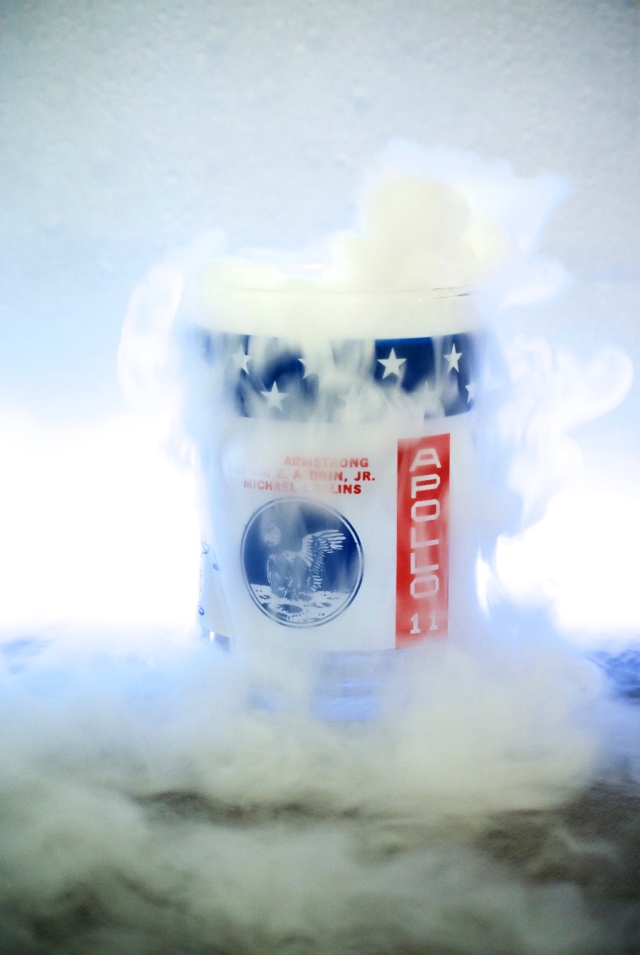 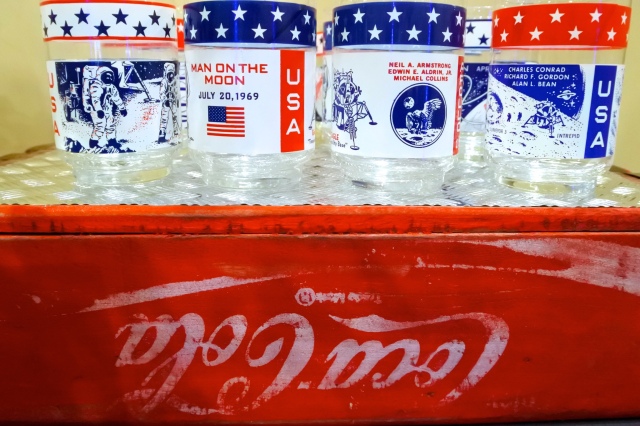 Two of our lovely goddaughters did a fantastic job compiling a memory book for us, using a vintage-style FujiFilm Instax camera. It was so lovely to spend the afternoon with friends and family. 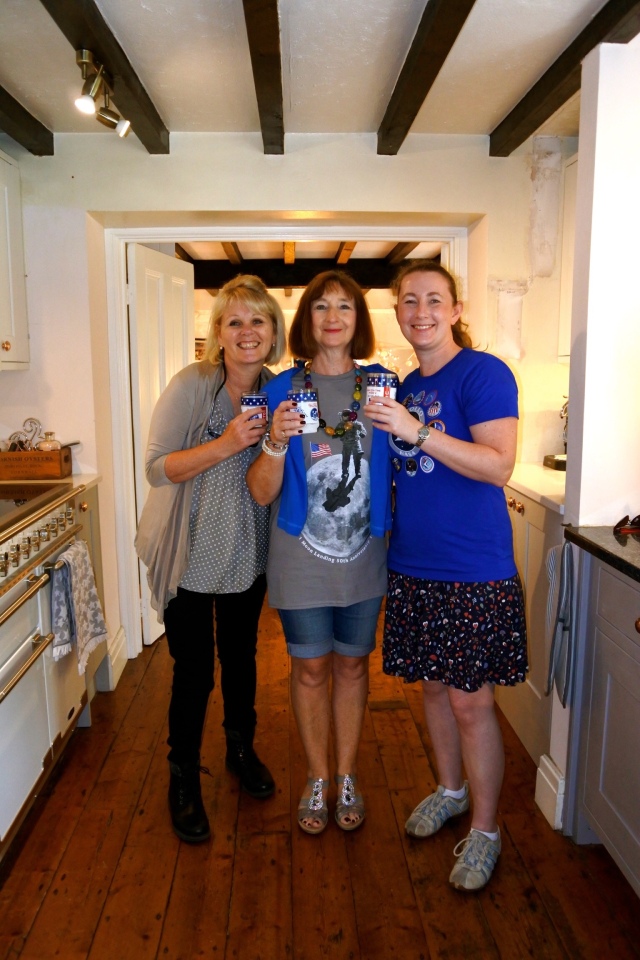 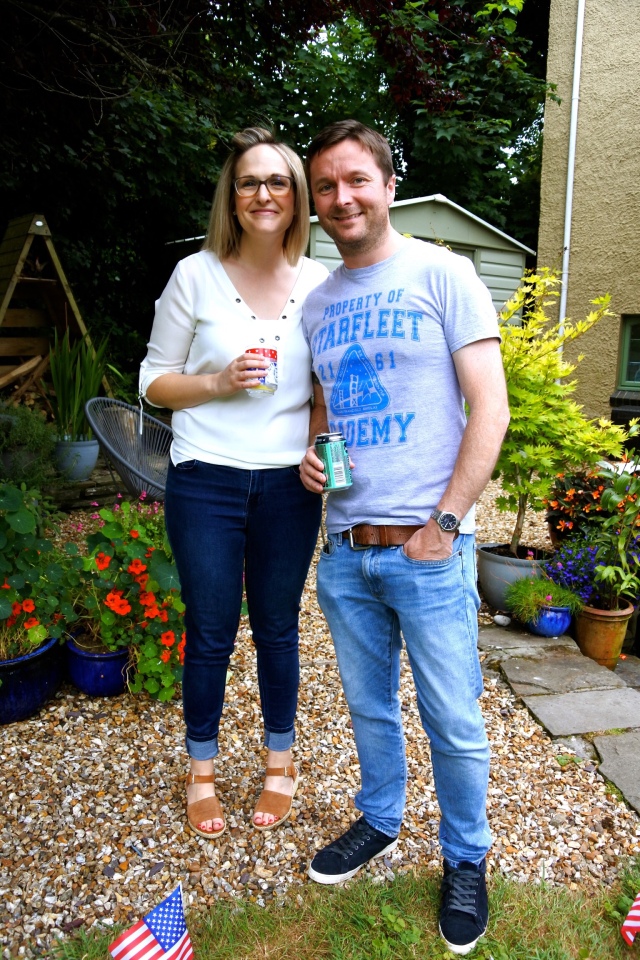 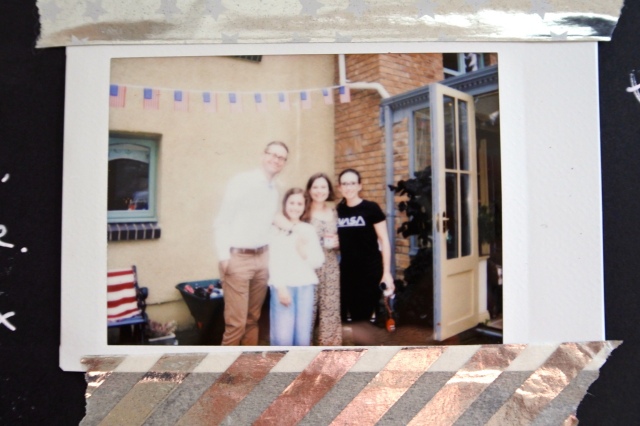 Inspiring the next generation of space scientists

We had a few kids coming along to the party, and we set up some activities to help keep them occupied during the day.  We made a “Shoot for the Moon” Corn-hole game using a panel left over from our new kitchen and gave everyone a book about space.  We also set up our trusted projector in the shed and showed the recent BBC documentary, “8 Days to the Moon”. 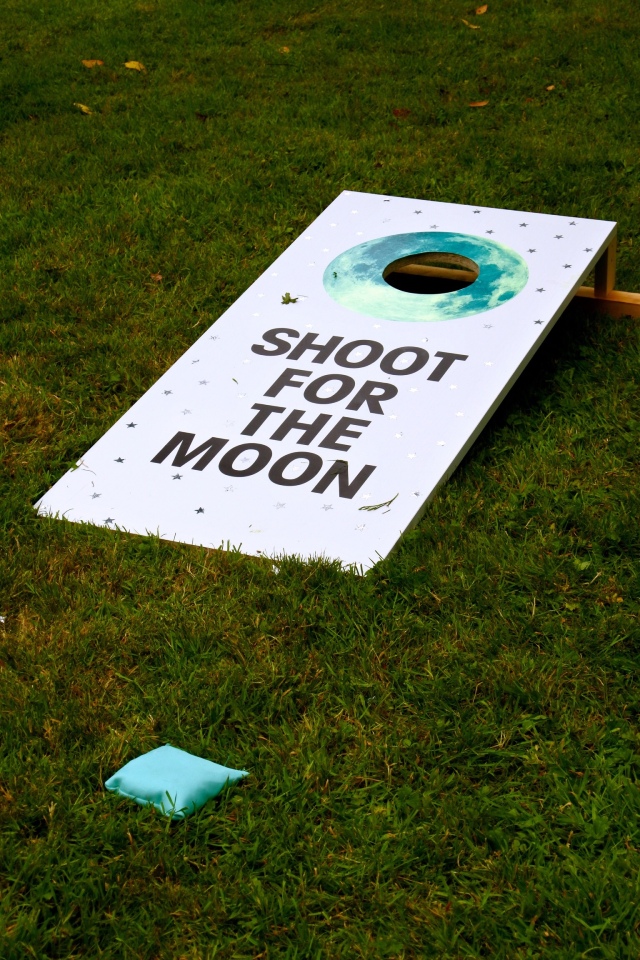 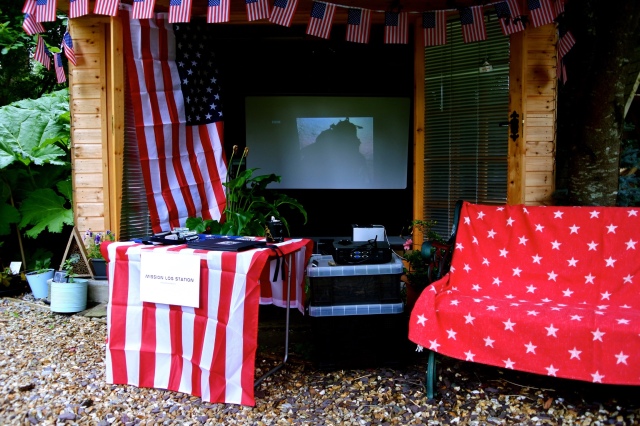 Thank you all for coming and here is a small selection of the wonderfully thoughtful gifts we received. 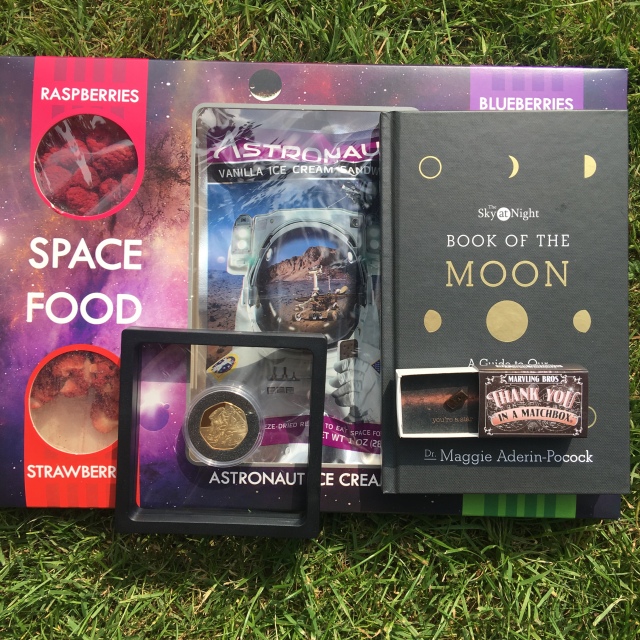 What the Moon Landing means to me

I have always had an incredible passion for all things space. Whilst I will never be a scientist or an engineer, I still find it awe-inspiring to think about what so many men and women have achieved on our behalf over the past five decades.

We have had the pleasure to meet some amazing astronauts, including Buzz Aldrin, Chris Hadfield, the late Alan Bean and Bruce McCandless.   We use the term “legend” far too often these days, but these men are genuine legends, having put their lives on the line for the sake of discovery and progress.

We were also very lucky to visit the Kennedy Space Centre in 2012 just after the retirement of the Space Shuttle programme, and got to see the iconic, Discovery space craft being prepped in the magnificent Vehicle Assembly Building.  This was a total surprise to us, as the tour guide didn’t tell us the shuttle was at the VAB, and I could hardly contain myself when I caught a glimpse of NASA’s most dependable work-horse. 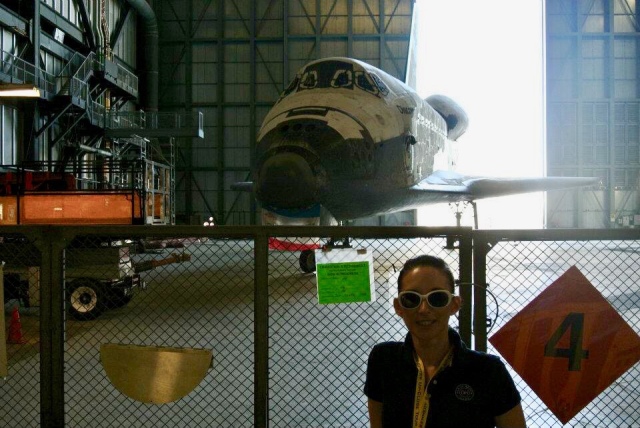 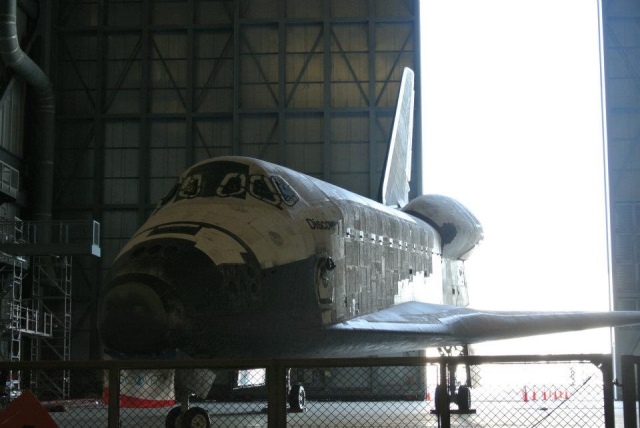 More recently we visited an exhibition of our very own Tim Peak’s space capsule and space suit, and Tim is doing some incredibly work to engage with the next generation of space engineers and astronauts.

We were also very proud to be able to contribute to the restoration of the historic Mission Control centre in Houston, which recently re-opened in time for the 50th anniversary celebrations. Without Mission Control, it is unlikely NASA would have landed on the Moon in 1969.

I can only hope that one day we will get the opportunity to see a live launch of a space rocket, which by all accounts is a sight to behold.  It would be fantastic to get to see NASA’s newest rocket, the SLS (Space Launch System), which will rival the majesty of the largest machine ever built by humans, the Saturn V.

It was very fitting that we experienced a partial lunar eclipse on the 16th July, exactly 50 years from the day Apollo 11 launched from Cape Canaveral and making us all gaze up and appreciate the splendour of our closest neighbour. 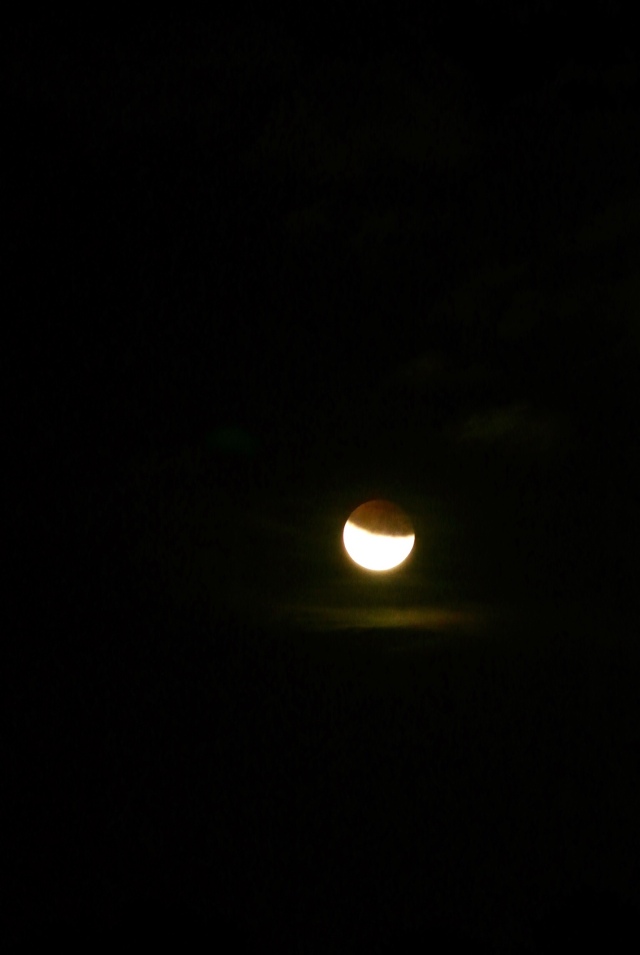 I hope that the new Artemis missions will serve to inspire a new generation to have a keen interest in science and space, in the same way that the Space Shuttle missions sparked my love of space, and the moon landing did for the generation before me.  Here’s to the next 50 years of space exploration! 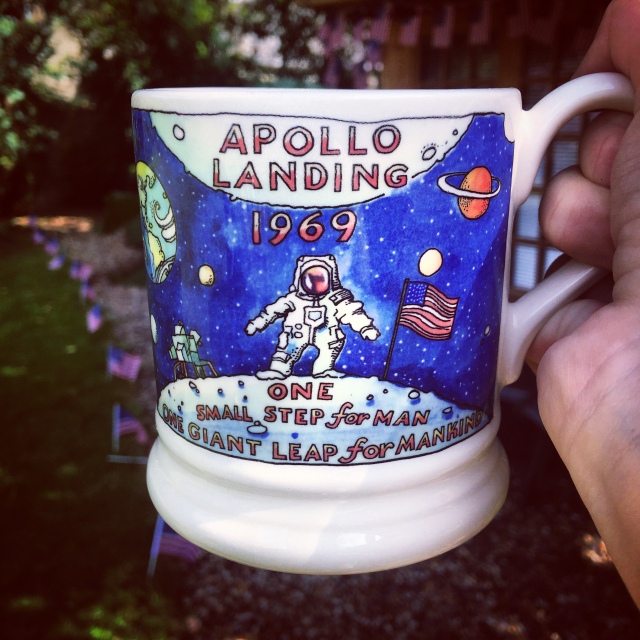